I want to share the recipe I created (with suggestions from others, of course) for my son’s 1st birthday cake.

I fall in between the people who don’t want their children to have any sugar, and those who are fine with a little sugar shock. We wanted him to have a yummy cake with some sugar, but not the normal, full amount.

This recipe is mostly sweetened by fruit, with only 1 tbsp of brown sugar in the cake, and powdered sugar to taste in the icing. The batter doesn’t taste as sweet as the finished product because the sweetness of the bananas and carrots comes out during cooking.

We went the route of cupcakes, but the recipe can be used for either.

I can’t believe my baby is turning ONE!!!

Preheat oven to 350. Mix wet and dry ingredients separately, then combine. I made my applesauce with no added sweetener and skin left on. I also put my bananas and carrots (raw) in the food processor for easy shredding and mashing.

Bake for 18-20 mins, or until a toothpick comes out clean.

We iced our cupcakes with cinnamon-cream cheese frosting, but only added powdered sugar to taste.  It was roughly 1 tsp of cinnamon, 1/2 stick of butter, 1.5 containers of cream cheese, and 1/3 cup of powdered sugar. 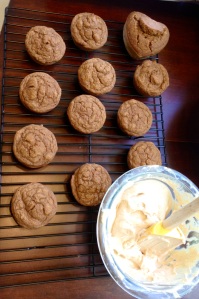 As we approach Aidan’s 1st birthday, I’m at odds with one of my favorite indulgences…cake.

Up to now, he’s had sugar once. I’m not counting trace amounts in things he may have tasted or natural sugars; I’m counting the one time we let him have a tiny taste of a shave ice, and he proceeded to spit up clear liquid 3x over the course of an hour. We took it as him exhibiting sugar-rejection.

Anyway, after steering clear of sugar for a year, how do you introduce cake, in all its sugarific glory, in one big dose? I wouldn’t go from a caffeine detox to drinking a jug of coffee, which seems kind of similar, but I want him to get to try “the good stuff,” too.

I know I could make him a sugar-free cake, but wouldn’t that start us down the road of having the kid who brings his own cupcake to other kid’s parties forever?